Our ability to self-determine our bodies, families, and future extends far beyond abortion.

It has taken longer to write this statement because I have been consoling my Black children every waking hour of the day and grieving the many times we have written it before. When we mourned for Black lives lost in 2015 and 2016, we wrote about how reproductive justice is as much about raising our children without fear of being killed by a police officer as it is about accessing an abortion. When we mourned for Charlottesville after emboldened white nationalists took to the streets, we wrote about how white supremacy and reproductive coercion are two side of the same coin, born out of the Indigenous genocide and enslavement of African people on which this country was founded. How much more must we mourn?

I lead this staff as the first Black leader of the National Network of Abortion Funds in its 27 year history. Two thirds of our staff are people of color and a third are Black. The issue of police brutality is not a theoretical one for us, or our families. It is our staff who monitor social media late into the night, field round-the-clock questions from reporters and donors, and too often, open emails from anti-abortion extremists who accuse us of killing Black babies. Last week we changed our profile pictures in defense of Black life at the direction of Movement for Black Lives and shared their quote: 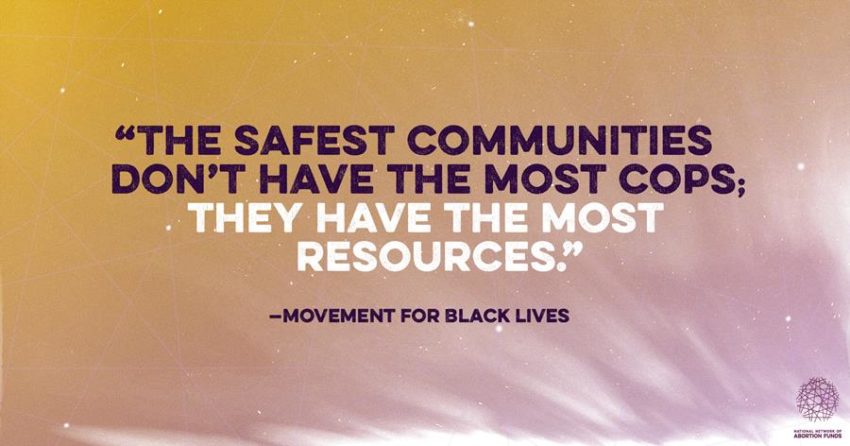 We stand with the Movement For Black Lives and our colleagues in the Reproductive Justice movement  in calling to #DefundThePolice. We are tired of mourning. And we are tired of putting on our brave faces to show up for work while we do it. Yet, here we are again. We mourn for Breonna Taylor, George Floyd, Nina Pop, Tony McDade, and countless other Black people killed by state-sanctioned anti-Blackness. We mourn for Rayshard Brooks who was killed by Atlanta police this weekend for falling asleep in a fast food drive-thru. We mourn for leader and anti-police violence activist Oluwatoyin Salau, killed after speaking out about her sexual assault. We mourn for Riah Milton and Dominique “Rem’mie” Fells and the countless Black transwomen who have been killed by cisgender men because of patriarchy that must end. We mourn the nearly half of people killed by police that have had disabilities.

At the National Network of Abortion Funds, we are 100% clear: our ability to self-determine our bodies, families, and future extends far beyond abortion. We work in service of a vision where we all have the autonomy to make our reproductive and parenting decisions in safe, healthy, thriving communities – free from laws that criminalize our abortions, public budgets that starve us of the resources we deserve, and yes, free from police, prisons, and all forms of state violence. This hasn’t always been the starting place for abortion funds, but it is the vision that guides us forward on the path to true liberation and abundance. We made that clear at our last National Organizing Summit where our 2018 keynote speaker Mariame Kaba, one of the most notable abolitionists of our time, educated and inspired abortion funds and where our network honored the work of Chicago Bond Fund and Mary Hooks for the Black Mama’s Bail Out.

When I came to lead the National Network of Abortion Funds, I knew that I was leaving a reproductive justice organization to become the first Black leader here and that it would not be easy. I knew my hire was the result of courageous women of color on the NNAF board and staff who raised hard questions about representation and experiences of people of color within the organization and the network. I knew that while NNAF and member abortion funds had championed repeal of the Hyde Amendment in the nineties and early 2000’s when almost only Black women were doing so, it was an act of allyship. However, then and now, I knew most abortion funds are led by passionate white women who can afford to volunteer, that abortion funds are autonomous organizations we do not have authority to govern, and that we would have to depend on years of values alignment, political education, and resourcing leadership development to shift towards racial justice in our network. I knew that some people who donated to abortion funds were donating for the wrong reasons. Reasons rooted in racist tropes about who can and should have children. I knew that most people calling abortion funds were people of color struggling to make ends meet. Half of the people who called the former Tiller Fund for support were Black. I have been very clear on who our constituency of abortion fund callers are and what we owe to Black, Indigenous and people of color (BIPOC) and what needed to change. While we have been in process the last few years to make those changes within our own network, we have quite a ways to go. The leaders and volunteers of color cannot do that work alone. Just as men must step up to end patriarchy, white people MUST step up to end racism. We do this work to transform our network against a backdrop of one of the most racially polarized times in our history. While our work is critical and important, it cannot be separated from the racially charged context in which we work.

In 2016, in my first year in leadership and the same year as the catastrophic Presidential election, while going through a strategic planning process, our largest fundraiser was hacked with violent anti-choice rhetoric and racist messages.  In 2017, we launched a new mission and strategic plan that predicates removing financial and logistical barriers to abortion access on organizing at the intersection of racial, economic, and reproductive justice. We also made a political and cultural agenda that included decriminalization. Not just of abortion, but across the spectrum of reproductive experiences because criminalization of pregnancy and miscarriage disproportionately affect pregnant people of color. Since then, NNAF has been out front and vocal, in programming, in statements to you and the media, and on social media, that the growing suspicion and criminalization of self-managed abortion, alongside state violence by police and immigration, is at its heart designed to target people and families of color. We cannot ever achieve abortion access as long as racism is alive and well in our government, in our communities, in our organizations—including abortion funds. Period. That means we have to transform not just as organizations, but as people.

Our mandate is closing the gap between who calls abortion funds for help, and who answers the phone; it has never been acceptable to have all white boards, all white volunteer groups or all white staff. We’ve offered day long racial justice institutes at our National Organizing Summits and at our regional convenings. We have created programming that centers the leadership development of people of color. We have prioritized strengthening the foundations of Black led funds to emerge and thrive by resourcing them with financial and organizational development support. Within our network, the needle has moved a bit towards Black, Indigenous and people of color led abortion funds, with bright spots illuminating the way forward. Our goal to resource the scaling of abortion funds is not separate from our racial justice work; with actual paid wages, there is a more equitable playing field for people of color—particularly people who have been abortion fund callers and cannot afford to volunteer their labor—to be paid to lead the work of abortion funding. This is the future of abortion funding that I imagine. And the tide is turning, even if not as fast as we would like.

Still, it is only Black and people of color-led funds about which we receive “anonymous” complaints or media inquiries into fiduciary responsibility when their work goes beyond abortion to integrate more comprehensive reproductive justice priorities. Abortion funds writ large are still mostly white-led. Our work is not done, and it shouldn’t ever take a spree of Black deaths for people to reflect on their role and their work. We know that we haven’t yet met our mandate. So we look forward to your partnership as we move closer to a time where all abortion fund callers feel reflected when they call for help. When volunteers from all identities feel welcome and supported when they show up to support abortion funds. When all abortion fund staff are paid for their labor and engage in anti-racist and equal employment standards. Until then, we are listening, learning, undoing, transforming, and building.

In solidarity and mourning,

If you’d like to learn more about the movement for police abolition, here are some resources that may help: 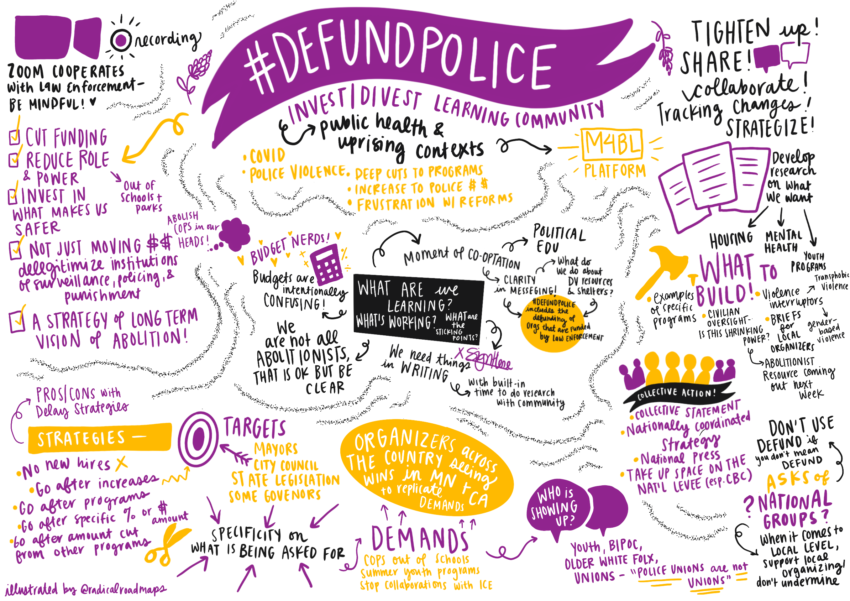 Readings and Resources on Abolition and RJ, Young Womxn of Color for Reproductive Justice Collective, a project of Advocates for Youth

The people’s history of prisons, Mariame Kaba on Intercepted podcast

What abolitionists do, Berger, Kaba, Stein in Jacobin Mag

Alternatives to policing, An explainer and imagination cards

If you’d like to send extra love or support to Black, Indigenous and people of color led abortion funds, find them here.

*This list may not be exhaustive since the leadership of abortion funds shifts with staff and board transitions. It was put together using responses to optional questions in our Membership Enrollment Survey as well as our own relationships with funds. Funds in this list have BIPOC leadership in paid roles (such as Executive Director) or unpaid roles (such as Board Co-Chair).

The Afiya Center – Support Your Sistah