When undocumented people are under attack in the United States, we are all under attack. None of us can afford to wait in silence for the fury to pass, especially our legislators, who are responsible for both hearing and responding to us. We are not asking legislators merely to undo the latest most heinous tactics because we recognize this moment is built on a gradual escalation. Both ICE and U.S. immigration policy have a long history of oppression, dehumanizing, and criminalization, and our legislators must take action to end these policies and practices immediately. These atrocities against immigrant children and families will never be forgotten, and echo ruthless, xenophobic and racist events in U.S. history that should never be repeated.

Make your voice heard by donating to RAICES, the National Latina Institute for Reproductive Health (NLIRH), and Mijente.

As we bear witness to the horrors of our endlessly brutal and worsening immigration fallout, abortion funds and We Testify abortion storytellers are speaking out because we know first hand that people who are already struggling to navigate difficult governmental bureaucracy are in a vulnerable position. 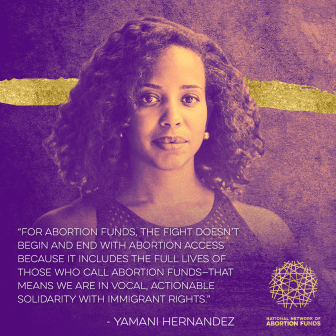 “Abortion funds know from decades of experience that undocumented people face undue barriers when seeking any form of reproductive care. More than that, many people in our network are immigrants, undocumented, and serve undocumented people who need support, affirmation, and resources. The fight for our autonomy is all-encompassing. For abortion funds, the fight doesn’t begin and end with abortion access because it includes the full lives of those who call abortion funds—that means we are in vocal, actionable solidarity with immigrant rights. We send love and support to all undocumented people, of all ages, who have had their rights taken away when governments attack their bodies, lives and families. These battles break our hearts, but they don’t slow us down. They compel us to fund more deeply, to fight more boldly.”

The targeting of undocumented youth has already been a sickening pattern that is just one piece of this administration’s repeated attacks specifically targeting people of color and immigrants. In past months, this has taken place through the unethical targeting of young immigrants being held in detention who are in need of abortion care.

“As a DACA recipient I’ve been undocumented for the past 26 years, and in the four years I’ve had DACA, I’ve been able to think about and build a future. I know what it’s like to live under the oppression of U.S. immigration officials, and I feel for the Janes. When I had my abortion, I was in the middle of deportation proceedings, and I wasn’t sure if I would get care – thankfully, I was able to. Because of the Trump administration, I’m back to a state of uncertainty. It’s difficult to think about beyond today, because tomorrow I don’t know what’s going to happen. Like many Americans, I’m in a mixed status family. My mother was able to get status and I was not, and she constantly worries about my safety. It is stressful to raise a family under the threat that separation can happen at any moment. Our broken immigration system destroys families. This is a reproductive justice issue.”

“After spending over 40 days in a private immigration jail in Eloy, Arizona for the second time in my life, I can tell you that there is no jail fit for families and people. There is no humane way to incarcerate people in a for profit system. This system has shown us that we don’t have autonomy over our bodies, and they continue to separate us from our communities. Due to my immigration status, I have been forced to make decisions out of fear of being separated, the fear that many of us deal with every day and families who did decide to give birth are still living in. This government is trying to attack us on all sides by taking away abortion care, access, education, and by incarcerating families and people indefinitely seeking asylum and a better life. If we care about families, we need to pay attention to the criminalization and profiting of our people by our own government. We are not safe while people are in jails indefinitely.” 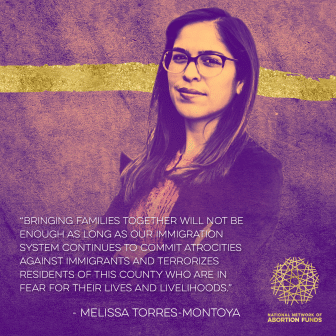 “To be clear, we will not accept a ‘solution’ that involves the indefinite detention of families. There can be no justice if the families who have been torn apart are not immediately reunified. Even further, bringing families together will not be enough as long as our immigration system continues to commit atrocities against immigrants and terrorizes residents of this county who are in fear for their lives and livelihoods. Reproductive justice and immigrant justice demands that families never be imprisoned under any circumstances.”