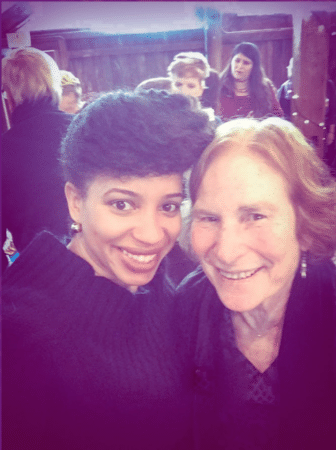 Thinking back over 25 years ago, to the conference at the 4-H Center outside of Washington DC, what inspired you and other founders to form the National Network of Abortion Funds?

At that time, the mainstream pro-choice movement was focused on defending the legal right to abortion. Repealing Hyde and abortion access more generally were not in the forefront of their agenda. Those of us who founded NNAF came with a different perspective. The Hyde Amendment created an enormous gap between having the legal right to abortion and being able to get one. All restrictions on abortion access and funding primarily harm low-income women of color and those who have faced other forms of  marginalization.

We were drawn to working in abortion funds as a matter of justice. Even though we knew that private money cannot substitute for government funding, we were committed to doing everything we could to fund abortions for as many people as possible because it made all the difference for their lives. At the same time, we understood that long term policy change was  required. Government funding is the only way to ensure that abortion is a right, not a privilege. We were inspired by the leadership of the National Black Women’s Health Project’s leadership on Hyde. Their 1993 project, CAARE (Campaign for Abortion and Reproductive Equity) was the only national advocacy effort against the Hyde Amendment. Our participation in that campaign convinced us of the need for a national organization focused primarily on abortion funding and grounded in grassroots activism. Bringing the funds into a single network would let us strengthen and amplify our collective work, and create a force within the pro-choice movement prioritizing abortion access and repealing Hyde.

Working to repeal the Hyde Amendment was a priority for NNAF from early on. What role did you envision NNAF would have in advocacy and systems change?

NNAF’s dual, integrated focus made it unique in the landscape of abortion rights organizations. We were committed to centering the voices and experiences of those who needed funding in our policy advocacy.  NNAF’s support for the daily work of member funds also enabled us to play a leadership role in the longer range work of rescinding Hyde and challenging other barriers to abortion access. We did not see any contradiction in doing both. Prioritizing advocacy and systems change was crucial to achieving  access for all. Providing direct access kept us grounded in the real experiences of those most harmed by discriminatory policies like Hyde.

Reflecting on your 10 years as executive director, what stands out as highlights about the work abortion funds were doing at the time? What were your hopes and dreams for the future?

Abortion funds were the leading edge of the fight for abortion access. Fund activists were passionately committed, and often went to extraordinary lengths to provide direct financial assistance. They responded to calls at all hours of the day and night. They anguished over every person and cried when they could not meet the need, which, of course, was most of the time. I was sorry abortion funds needed to exist, and extremely honored to be part of this Network. My hopes and dreams back then were for NNAF to be part of creating a world in which abortion funds would disappear, because everyone had access through Medicaid or national healthcare.

You and Loretta Ross are collaborating on a new book about abortion politics & reproductive justice in the 21st century, which will feature some writing about abortion funds. From your perspective, what is this political moment calling for? What does it require of us?

Our book is about abortion advocacy through a reproductive justice lens. This seems especially critical in the current political moment when we face an avalanche of attacks not just on abortion access, but on all human rights. Racism and white supremacy are legitimized in every branch of government. Everyone dedicated to social justice and human rights is being called to action to meet these challenges. We need to be part of a human rights movement. We can draw on each other for hope and inspiration — our activist fuel. For this reason,  the book will also include the voices of other activists, researchers, providers, and lawyers who talk about what it means to do their work in a reproductive justice framework.

Given your grounding in our history and knowledge of our place in the abortion access movement, why is NNAF best positioned to take on the challenges of the next 25 years and beyond?

NNAF has become a fierce and strong leader in the reproductive justice movement. It consistently demonstrates what it means to advocate for abortion access through a reproductive justice lens. It has remained true to its initial commitment to change policy and to support direct action that changes lives today. This is the vision and tenacity needed to meet the challenges we continue to face.