Putting the FUN in Fund-a-Thon during challenging times

The first-ever Dance-a-Thon that Access Reproductive Care–Southeast hosted back in 2016 was truly special.

“It just had to be a dance party,” explains Quita Tinsley Peterson, Co-Director of ARC–Southeast. “We throw some of the best dance parties here in Atlanta!” They easily doubled their original fundraising goal and had some special guests: attendees at that year’s NNAF Southern Funds convening, happening in Atlanta at the same time.

“It felt really beautiful to have other funds rooted in the South there to help us celebrate our first Dance-a-Thon, and it reinforced the idea that abortion funding is community-centered, folks supporting other folks.”

Tinsley Peterson came to abortion funding through her work in Reproductive Justice, organizing queer and trans youth of color. Three Black women who met while working at Atlanta Women’s Center founded ARC-Southeast in 2015 after witnessing so many people face barriers to abortion. Tinsley Peterson grew up in central Georgia, hours from the nearest clinics, and abortion was something people only talked about in euphemisms.

“This work is a way to destigmatize abortion but also support people and provide care in real time,” she says. “Plus, I was interested in joining an organization led by Black folks and centered around people of color and those most impacted by barriers to abortion access.”

Many of the people who call ARC-Southeast’s healthline are the same people who donate to the fund. That’s partly why last year’s Dance-a-Thon, held virtually on Facebook, marked the first time they did not meet their fundraising goal. It also just wasn’t very fun.

This year, Tinsley Peterson and her team regrouped, and found more success hosting a dance party on Twitch, though she’s hoping next year they’ll be able to be back in person. “It’s about the energy of being able to be in space with other folks in the community and celebrate what we’ve done around fundraising.”

“A lot of the time, the narrative around abortion access is focused on the lack of access to care—which is very real and it’s why we exist,” Tinsley Peterson says. “But the love and joy that’s in the work we do motivates people. Being able to proudly say ‘I love my community and that’s why I fundraise and that’s why I donate.’ It’s only doom and gloom if no one steps up to do anything about it.”

Tinsley Peterson: “It’s the personal touches where you’ll find the most engagement. The human element is so important; abortion funds are about people in community showing up for other people. Instagram posts are fine, but also make calls and send those personalized texts and emails.” 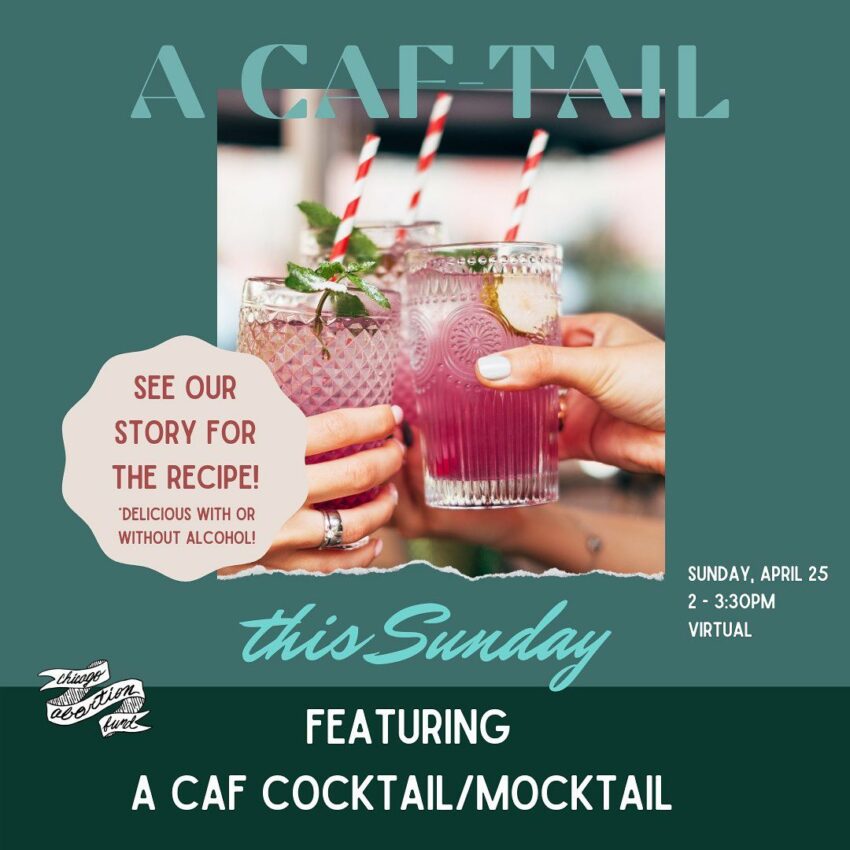 For all the challenges faced this past year, there were also some positives for the folks at Chicago Abortion Fund.

“More and more people are realizing it’s not charity, it’s about communities caring for one another,” she says. “We have to be responsible for each other and normalizing that goes a long way.”

COVID safety precautions (and a few too many Zoom meetings) also inspired CAF’s Fund-a-Thon organizers to find a more low-key way to toast the success of the fundraising season. The Sunday afternoon virtual Dance-a-Thon featured a local DJ and recipes for non-alcoholic “CAF-tail” drinks. Everyone was welcome—including CAF’s smallest supporters. The volunteer-led Chicago Childcare Collective offers free childcare to local organizers and activists. They helped entertain little ones on a simultaneous video chat during Dance-a-Thon with games, songs, and a scavenger hunt.

That commitment to inclusivity is something that helped Jeyifo feel a part of CAF long before she joined the staff. She recalls her first Bowl-a-Thon, back when she was a volunteer, fundraiser, and We Testify storyteller. The entire community was invited to a local bowling alley, whether they fundraised or not, and childcare was available with kid-specific activities. “I always felt really welcomed and supported,” she says. “It just felt so good to be able to celebrate together.”

From there, Jeyifo joined the CAF board, then eventually paid staff. She sees many people following the same path, starting as fundraisers and then growing their commitment to the fund, describing Fund-a-Thon as a great way to bring in new people who will have a big impact on the work.

Jeyifo hopes she and her “fantastic group of volunteers and board members” can find a way to safely gather in person next year. “I really miss seeing all the people who make up our very large CAF community!”

Jeyifo: “I’ve had new funders tell me that making the ask is hard! But the more people you talk to, the more comfortable you’ll feel and the more people you’ll bring to the work. You’re not just asking for money, but you’re also having a conversation with your community about why abortion access matters to you personally. Each time you ask, you’re shifting culture and doing a little bit more to chip away at abortion stigma.”

How Funds Are Preparing For Ongoing Work Post Fund-a-Thon

by Wendy Hathaway The COVID-19 pandemic increased barriers to abortion access in unprecedented ways, from unemployment to transportation and travel to childcare and more. These hardships are on top of a growing number of radical attacks on abortion access across the country. Locally, at least 69 abortion restrictions have been enacted in 14 states — […]

by Wendy Hathaway For more than a year, the number of people seeking financial and practical support from abortion funds has continued to climb. Throughout Fund-a-Thon season and beyond, our robust community of staff, volunteers, supporters, and fundraisers has responded by showing up for abortion access with incredible creativity, perseverance, and kindness. DC ABORTION FUND […]

by Wendy Hathaway Fund-a-Thon season has always looked a little different depending on which community you’re in, from traditional bowling to trivia night to dance marathons. That hasn’t changed during the COVID-19 pandemic and while some funds organized virtual film screenings, yoga practices, and online brunch, others discovered that hosting an event just wasn’t a […]